Through a small tracker, Lynq is like a "compass for people" that uses a peer to peer network to find people even off the grid.

Lynq Technologies, a company that creates tiny trackers that use long-range radio waves and GPS to help people find each other, raised $ 6 million in a round of Sony Innovation Fund funding.

Prior to this round of funding, Lynq raised around $ 2 million in 2017 and around $ 1,7 million in crowdfunding in 2018. Just a few weeks ago, the company finally put its tracker up for sale to the public.

Founded by New York in 2014, Lynq uses a decentralized peer-to-peer (P2P) network to help people in remote or "off-grid" locations keep an eye on each other's location with a sort of "compass for look for people ".

In 2017 Lynq tested its technology with the US Pacific Command, and helped locate injured or unconscious soldiers. Company he said it has since also been used successfully by the US military and air force.

A compass to look for people? It can be very useful

The Lynq tracker can work in ski resorts as an avalanche safety device or to follow colleagues when going off-piste.

Or it can be useful for families who want to track down their children in a crowd at a concert or in the great outdoors.

In general, this "compass of people" helps groups of people to be together where there are no phones or connectivity, revealing the distance and direction of each person in the Lynq "network", almost like a map. connectomics.

"We believe this peer-to-peer networking technology is critical to providing robust, long-range and secure communications in a world where infrastructure may be difficult or unavailable," he observed John Frankel, who is on the Lynq Board of Directors.

Other similar tracking devices already exist, but typically they are short-range or require pairing with a smartphone, such as gotelé. The Lynqs are fully self-sufficient and cover a range of several kilometers: they can also be used continuously for 24 hours on a single charge or up to three days "mixed use," according to the company.

While there is no limit in terms of how many Lynq devices can be connected to a single network, it is worth pointing out here that they do not function as a mesh network: multiple Lynqs cannot be connected to extend the range by tens or hundreds of kilometers.

It is also necessary to previously pair each tracker to a specific network. This means that if there are other people outside the network using Lynq nearby, they will not be visible. Yes, privacy is a right. 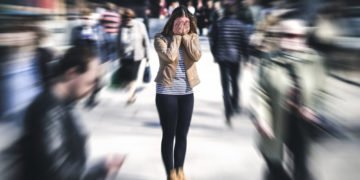 Cities are dynamic and stimulating places, but their residents have a very high rate of mental illness ...