Denmark queen of the wind in Europe: in 2019 a real wind record pushed the Scandinavians widely in the lead in the sector.

Denmark has just set a new record in clean energy: now nearly half of its needs are covered by wind energy.

In 2019, the Little Mermaid country got 47% of its electricity from the wind, based on preliminary data from Danish grid operator Rein reported by Reuters. It is a significant leap forward even compared to the high 41% of 2018.

The push is largely due to large cost reductions and improved offshore technology. Outstanding above all is the excellent performance of the new generation offshore wind power Horns Rev 3, which began operating in the North Sea starting last August.

Denmark is ahead of all other European countries in terms of wind energy, with Ireland harvesting 28% of its wind energy in 2018, according to a report by wind Europe.

The wind record makes the Danes proud and inflates the sails of their green ambitions: Denmark aims to reduce greenhouse gas emissions by 70% by the end of the next 10 years.

A Europe gone with the wind

Our continent pulls the sprint in terms of wind energy: in 2018, 14% of the total energy consumption in the whole European Union was brought to us by the wind. In the world, just think, wind contributes only 0.3% of all the energy produced.

Wind record, the future will see other goals

The International Energy Agency reported that that from wind is expected to increase 15 times over the next 20 years.

The result will come from the spread of greater environmental awareness and new technologies. Above all they stand out VorteX, wind turbine without blades, and the innovative typhoon power generation mechanism Magnus VAWT, under development in Japan.

Welcome this new wind of energy. Here is a tornado that brings good things. 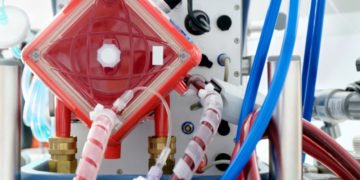 ECMO is a machine capable of saving or making people who are already dead survive even for months. A...