Pets? Beloved by many busy Japanese people. And for those who cannot or do not want to have them there is Bongo, robot dog.

Japan is the only country in the world where pets outnumber children. Children and pets are closely linked in Japan: as the number of babies increases, the number of cats and dogs increases.

Not that you understand walking in the streets of Tokyo: despite the growing number of cats, for example, it is rare to see them around. Much easier to see dogs, perhaps hidden in prams or wrapped in coats and blankets as surrogates for children. Today Bongo, a robot dog, wants to substitute them too.

You see few pets in town because owners are protective of them, or reluctant to let them out.

In general, cats are not allowed because their droppings are considered "antisocial".

Even city dogs are mostly "toy" breeds rather than working dogs. Very cute, but bred for trotting around in the living room and not for some specific task. Despite them, unfortunately, they are practically the four-legged equivalent of the "hikikomori" (hikikomori are people who refuse to leave their room for fear of interacting with others).

This leads them to howl often when left alone at home for many hours (i.e. always). And then they cost an eye of the head, and it costs to keep them.

Cats are more independent, but if you don't let them go outside their litter box will still need to be cleaned every day.

For this reason millions of inhabitants who live alone would like to have a pet to keep them company, but they have to give up. Those who love cute pets but are held back by dirt, smell and maintenance costs show great interest in robotic alternatives. In the beginning was Aibo, the robotic dog from Sony, but perhaps it was too early to introduce it. 14 years after his retirement (has it been so long?) He arrives Bongo, a robotic toy dog ​​from Bandai Namco, the giant born from the merger of two large groups in the entertainment sector.

At first glance, Bongo may seem a little tricky: it should be a kind of dachshund, with the trunk lengthening and shortening. Its legs are basically a disguise for the wheels, the tubular body makes it look a bit like a vacuum cleaner. But it's hard not to be impressed with the way his owner follows in the room.

Bongo can wag his tail and ears when you ask him a question (like: "What should the Japanese government do against the decline in birth rates, aside from putting robots in Uniqlo stores or give exoskeletons to old people to make them work forever? "). It also has a small but delightful repertoire of cagnesque movements and can even bark at strangers. Already. with his facial recognition system he becomes hostile to faces he has never seen, or does not recognize. Never let it socialize, for heaven's sake.

Despite the distrust, the robot dog Bongo comes away with little. It is granted to the new owners for a trifle, just 12.800 yen plus taxes.

A pittance also for Japanese prices, the equivalent of 120 euros. Virtually one-tenth the price of some precious and tasty (and noisy) Pomeranian Spitz or Akita.

Really convenient, after having also robotic religion take out even the last link with reality. 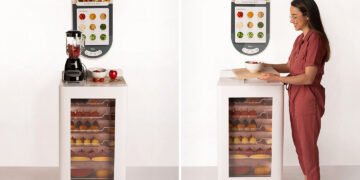 Show food on sight: a simple action that produces a transformation for a healthier style and a more ...