If Muhammad does not go to the mountain ... Each parking lot can become a charging point thanks to the volkswagen concept of battery charger robots. 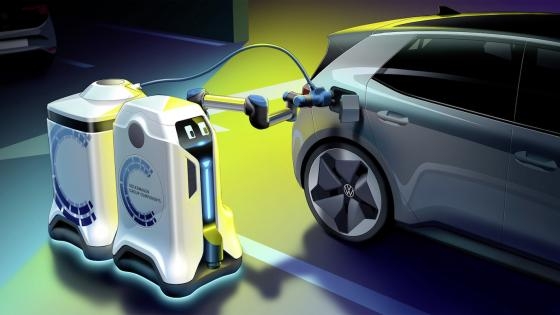 Volkswagen has revealed a new charging concept for electric cars consisting of autonomous battery charging robots that can bring an energy storage device to an electric car, charge it and return to its base without any human intervention.

The concept is designed for use in large car parks, such as those in airports or shopping malls. It opens the possibility of transforming each car park into a charging point without the need for a vast network of infrastructures.

How the battery charger robot works

Owners are expected to order a charging session using an app or their car's in-vehicle infotainment system. The robot comes into action when the car is stationary while the owner does his chores.

The robot takes the battery with it, connects it to the car's charging port and leaves it in place, moving away to set up other charging sessions.

Once charging is complete, the robot returns, disconnects the charging cable and returns the exhausted battery wagon to a central position, where it is recharged, ready for another use. The owner is informed via the app that his car has been charged.

Each battery wagon is expected to have a capacity of approximately 25kWh and each robot can carry several with it.

Battery charger robots can charge aelectric car up to 50 kW using fast DC charging, they are equipped with ultrasound scanners, lasers and cameras to help them navigate the parking lot.

Commenting on the concept Mark Moller, head of development for Volkswagen Group Components, said:"The mobile charging robot will trigger a revolution when it comes to charging in different car parks, such as multi-storey car parks, car parks and underground car parks, because we bring the charging infrastructure to the car and not the other way around".

In summary: potentially all car parks become electric charging points. It is a visionary prototype, which can be turned into reality quite quickly.

“This approach has enormous economic potential. Construction work, as well as the costs of assembling the charging infrastructure, can be reduced considerably through the use of battery charger robots. "

Volkswagen has not indicated a possible date for the introduction of the robot charger concept on the market. During the presentation of its next electric model, the Volkswagen ID3, the German company said it plans to install 36.000 charging points across Europe in the coming years. 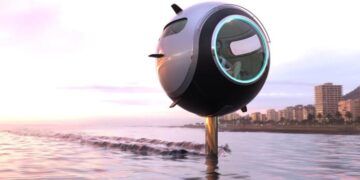 Fly, on the water and maybe in the sky. Or walk. A rather versatile and suggestive concept shows a sphere capable of ...