After successful monkey tests, the University of Alberta is ready to "cure" spinal injuries in humans. It won't be a short road, but it will work wonders.

A pioneering electrical spinal implant being developed at the University of Alberta could soon change the lives of spinal injury patients by making them walk again.

So far, the device has been shown to be effective in monkey studies, but the researchers hope to make it available for use on human patients with spinal cord injuries in less than a decade.

"We think the same intraspinal stimulation will cause people to start walking longer and longer, and perhaps even faster."says the lead researcher doctor Vivian Mushahwar, of the Neuroscience and Mental Health Institute of the University of Alberta. "There has been an explosion of knowledge in neuroscience in the past 20 years: we are on the eve of an effective connection between man and machine".

How the micro implant works to "repair" spinal injuries

The device features hair-like electrical wires that plug deep into the spinal gray matter, sending electrical signals to trigger networks that already know how to do the hard work.

It seems an operating mechanism not far from the one illustrated by Neuralink, the startup of Elon Musk. The latter it also includes the use of a special “sewing” machine to carry out the grafting.

To facilitate work on the implant, the team created a map to identify which parts of the spinal cord activate corresponding parts of the body. The hips, knees, ankles, toes, everything - even the areas that produce the movements.

"People tend to think that the brain does all the thinking, but the spinal cord has its own intelligence," says Mushahwar.

Being able to control standing and walking would improve bone health, bowel and bladder function, and reduce pressure ulcers, the researchers say.

For patients with less severe spinal injuries, an implant could be therapeutic and accelerate rehabilitation. eliminating the need for months of grueling physical therapy regimens which have limited success.

The team will further focus on perfecting the hardware. Miniaturizing the implantable stimulator will get approval from Health Canada and the FDA and then off to human trials.

The first generation of implants will allow a patient to control gait and movement through physical means such as an exoskeleton. In the longer term, the implants could potentially include a direct connection to the brain, they say.

Imagine the future. A person thinks and commands are transmitted to the spinal cord. People get up and walk. The future is a dream. 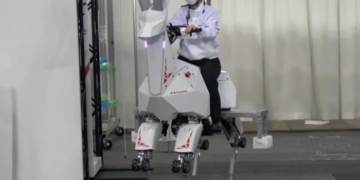 A quadruped robot that combines agility and stability. And yes, it has a kind of goat's head, but forget it ...