An expert neurosurgeon develops a medical hypothesis on head transplantation, and expects it to be feasible within the next ten years.

The first ever human head transplant could be accomplished by the end of the decade that is about to begin. This is supported by a former neurosurgeon who believes he knows how the business of moving a person's consciousness into another body can work.

Bruce Mathew, former clinical chief of neurosurgery at the Hull University Teaching Hospitals NHS Trust, was working on a science fiction novel with Institute of Futurology founder Michael Lee when he realized the potential key to making extravagant head transplant surgery a success.

In short, Mathew believes that surgeons should not only transplant a person's head, but place the entire spinal cord in another body.

Until now, the few controversial scientists who strove to make head transplantation (when not brain transplants) a reality have focused primarily on methods that exclude the spinal cord. It is an idea that Mathew, an experienced neurosurgeon with more than 10.000 operations performed, describes as "absolutely ridiculous".

But the 63-year-old Scot says that human advances in neurosurgery, robotics and stem cell transplants could allow an entire spinal cord (and obviously the corresponding head) to be reconnected to another body before 2030. A real transplant. head, in summary.

“Initially our intention was to brainstorm on an intuition and it seemed rather silly, but then I realized that in reality it is not. If you transplant the brain and keep the brain and spinal cord together, it's actually not impossible.He said Mathew to The Telegraph.

Studies on brain transplantation start long ago. Robert J. White's colossal work in the past century has marked much of current research. The head transplant "dad" has published more than 900 articles on the topic "monkey head transplant".

Sergio Canavero's procedure has received a sea of ​​criticism from other scientists, who in addition to skepticism have pointed out his previous claim of success with a monkey, which never regained consciousness and would have been paralyzed if he did. A few years ago, in 2015, the TV show “le iene” also dealt with his case. For my part, I searched for "monkey head transplant" but I didn't find many sources around: I'll try better.

Canavero, who has a human volunteer on hold, suggested that his work on head transplants it could pave the way for immortality. And that of "immortality" is the concept also used in the title of Mathew and Lee's book, "Chrysalis": a sort of surgical science fiction about the potential of some procedures.

But if we go from science fiction to reality, where are we with the head transplant?

“At the moment, you can connect one or two nerves, but with robotics and artificial intelligence we will soon be able to connect 200 nerves. You would remove the entire spine, so that you can drop the entire brain, spinal cord, and lumbar region into a new body. Obviously it is very difficult to extract the dura (the protective membrane of the spinal cord) without making a hole. It will take a series of progress and incremental steps, but head transplants are likely to happen in the next 10 years. "

While the method would not be of any help to people with spinal injuries, it could help people with degenerative muscle diseases, and Mathew suggests that it could allow people to receive robotic bodies.

Mathew told The Telegraph that there are still doubts that the head and spine can be made to successfully integrate with so much of another person's DNA. It may also be necessary to transfer its intestinal bacteria.

But he believes that stem cell transplants could be used to prevent rejection.

“By assuming the DNA of the brain and spinal cord, as well as a bone marrow donor. You would get rid of the donor's DNA and then colonize it with that of the person receiving the body ", he told the newspaper. 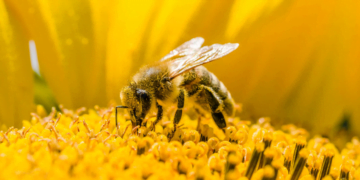 A pollen-inspired microparticle does its job of detoxifying bees from insecticides - and it works wonders.