Classical computers use a huge amount of electricity for computing and dissipate a large amount of heat in the process. Enough to require, you know, fans or water to be cooled. The environmental footprint of these devices is a threat to our environment. For this reason, less expensive alternatives have been sought for quite a while.

Thankfully, MIT researchers have invented a new computer architecture that is based on magnetic waves and does not require electricity to perform calculations. This is considered a great leap forward in the design of devices developed around magnetic-based "spintronic" circuits.

They use a quantum property of electrons called a "spin wave" in magnetic materials with a lattice structure. In this approach, the properties of the spin wave are modulated to produce a quantifiable output, which is in turn used for data computation.

However, modulation of these properties usually requires the use of electric current using devices that can cause signal noise, thus negating the performance gain.

The new circuit architecture developed by MIT involves the use of a magnetic area nanometers wide and made of layered nanofilms to modulate the properties of spin waves. The architecture eliminates the need for electricity.

Here is how he describes the discovery related to spintronic circuits the news organization MIT News: “In the future, pairs of spin waves could be fed into the circuit through two channels. They will be modulated for different properties and combined. They will generate measurable quantum interference that we will use for the calculations (a bit like photon wave interference is used for the quantum calculation) ".

Second Luqiao Liu, principal researcher of the group in the Electronic Research Laboratory al MIT, wave computing could prove to be a promising alternative to silicon computing.

He adds: “Using such small areas we can modulate the spin wave. These two separate states can be created without real energy costs. We only rely on spin waves and the magnetic material itself. "

Describing the circuit, Liu says it's like a water pipe. The area used, also called the “domain wall”, is a valve that controls the way water (spin wave) flows through the tube (material). When a strong enough spin wave is applied, the position of the domain wall can be changed. This modulation can be controlled and managed in a precise configuration.

Researchers are now trying to build working spintronic circuits to perform simple calculations. The next step is to optimize the material and reduce potential signal noise. Finally, we need to find a way to quickly change states by moving around the domain wall.

This new circuit architecture could pave the way for very efficient calculations. Calculations that do not require electricity, and in the process generate minimal heat. 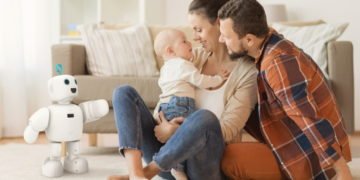 The "bad boys" of C-Lab, the innovation "incubator" division of Samsung, prepare a participation in style for the next ...