A police e-bike instead of motorbikes for patrols and various chases? On paper it can be done: but do you want to put the epic factor? 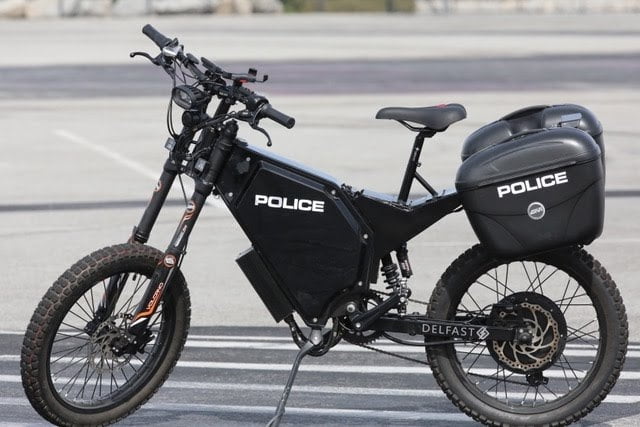 Becker, Poncharello, forgive them because they don't know what they are doing.

The electric wave also overwhelms the security forces, and it is less and less rare to see patrols around the world aboard electric motorcycles. But of course an e-bike ...

This new Delfast Top Cop introduces by right the police electric bike among the figures that the collective imagination associates with "good will never win".

Top Cop is a model derived directly from Top 2.0, a high-performance e-bike developed by the company.

Poimo, the inflatable ebike of the University of Tokyo

The Top 2.0 is (believe it or not) an electric bicycle already on the market with a 5kW motor that reaches a speed of 80 kilometers per hour. And call it a bicycle. Sure, it has pedals, but something tells me we're unlikely to see them in the lead role.

Delfast even claims that the bike's enhanced acceleration is "able to compete with most cars over half a kilometer". Unbeatable on lightning chases, right?

The Top Cop version of the bike also has a fairly large battery that guarantees 280 km of declared range. I'm not sure bicycle cops travel that much during a patrol shift, but it means they'll have more energy for those nano-chases we talked about earlier.

Delfast is not new to electric solutions with great autonomy: a few years ago it broke the Guinness World Record for the longest electric bike ride on a single charge and without pedaling.

Delfast believes that his police e-bike can deliver significant savings as well. Compared to electric motorcycles, the company estimates that its e-bikes cost around € 2.000 less per year in maintenance and operating costs, not to mention the much lower purchase price.

Tests and negotiations are already underway with over 20 police departments to introduce Top Cop e-bikes, which can be customized with a variety of tactical accessories. The standard equipment consists of a siren, enhanced headlights, load compartment, GPS locator and engine block.

On balance it's a good deal

After all, there is good savings and with e-bikes the police can access points in the city that would otherwise be difficult to reach. All in all in urban centers 80km per hour are not few, and it is unlikely that a traffic violation will end up in a chase. Yes, in the end I would say this police e-bike could work.

In any case for me, who remember those beautiful swingarms, those sparkling tanks and those fantastic chrome plating, the idea that CHIPS go on these little things makes you shake your head like a Labrador just out of the water. And after what else? Maybe we'll see them on a Solowheel?