Electric ships are a big step forward for the environment: maritime transport is highly polluting. This is why robot container ships are welcome. 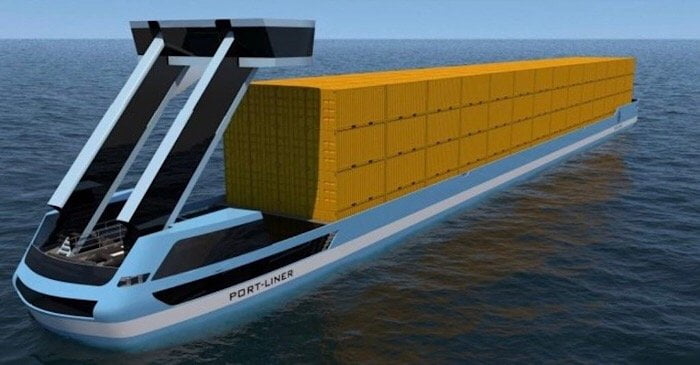 The Dutch company Port-Liner is building two giant all-electric barges nicknamed “Tesla ships”. The company announced that the robot ships container ships will enter full service later this fall, with their first use on the Wilhelmina canal in the Netherlands.

The € 100 million project, supported by a € 7 million grant from the European Union, could have a significant impact on local transport between the ports of Amsterdam, Antwerp and Rotterdam.

Port-Liner CEO Ton van Meegen said: “There are around 7.300 domestic trade vessels in Europe and over 5.000 of these are owned by entrepreneurs in Belgium and the Netherlands. We can increase by 500 per year, but at that rate it would take about 50 years for the industry to run on clean energy. "

Battery barges have a respectable capacity: they are capable of carrying 280 containers. The first 6 barges in the new fleet are expected to remove as many as 23.000 trucks from the roads in the Netherlands each year and replace them with zero-emission transport.

One of the containers acts as a battery

Port-Liner is developing a technology that houses batteries inside a container: it could allow them to retrofit existing barges into electric container ships.

“It would be a great boost for green energy in this sector. The containers are loaded on the ground by Eneco, a carbon-free energy supplier: it supplies solar, wind and renewable sources. "

The first electric ships will make their maiden voyage later this year.

In the near future all transport systems are expected to be gradually converted to electricity and this includes maritime transport. Especially maritime transport, as it produces a lot of pollution. Some of the world's largest merchant ships emit pollution comparable to millions of cars put together.

Electric ships can change a lot: toast their launch!

Heatherwick Studio signs another spectacular project: this time it is a floating park that will see the light in Korea of ​​...