Objects "covered" with moving images? Just one of the applications of the Dynaflash projector and its 1000fps technology

Dynaflash is a projector that maps a moving and deformed surface at 1000 frames per second. In practice, it can project an always stable image onto any surface, no matter how much it moves.

Have you ever seen a 1000fps projector capable of sending images that move perfectly in sync on a flag in the wind? We first show you Dynaflash than explain it, and in fact I will show it to you, then we think about it a bit:

The project was born inIshikawa Watanabe Lab, a facility of the University of Tokyo that deals with researching and applying new technologies: this is one of his most successful and promising projects.

The secret? An infrared grill

From the presentation of the research I learn that the crux of all technology lies in a tool that can also be successfully used in other fields. The image transmitted by the projector remains non-deformable, adapting itself at incredible speed because it is literally “modeled” on an invisible infrared grid which is used as a base.

1000fps, a faster projector than reality

Thanks to this "infrared electronic viewfinder" the method developed by the team is able to obtain the "adaptive" deformation of the image at a speed of 1.000 fps, a thousand frames per second even when the plane on which it is projected changes abruptly and quickly.

Using these two technologies already patented by the Laboratory, DynaFlash and Deformable Dot Cluster Marker, a new dynamic mapping for the 1000fps projector is obtained on a non-rigid deformable surface.

A mesh, a flag, a house facade, any fixed or mobile object that is 'marked' in the infrared can accommodate non-deformable images. Any part of tangible reality can form a basis for advanced augmented reality projects.

“Painted” objects with changing textures, images and colors may become commonplace in a few years also thanks to this technology.

The fields of application, from design to security through home automation, are infinite. 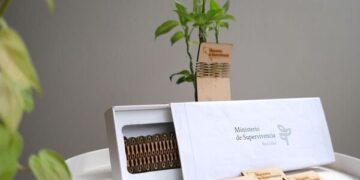 Biocollar is a wearable device that provides tactile feedback to know the needs of your plants.