Two extra robotic arms are really convenient, but until yesterday they were difficult to use. Co-Limbs revolutionizes the interface by making it easier than ever

The universe linked to the exoskeletons is made up of a thousand different shades. There are devices that increase performance, others that support the back, still others dedicated to people with disabilities. Finally, others add functions to functions, multiplying the possibility of carrying out actions.

This is the case with "redundant" devices. Having two arms is comfortable and natural, but the opportunities increase considerably if we have four. There is a limit, however, and it is currently represented by the user interface, which is often complicated to use. It would be better to say "was", since today there are the robotic arms of the Co-Limbs project.

An international group of engineers from Japan and France have created a pair of wearable robotic arms that allow the user to interact with objects. Development will be presented at the SIGGRAPH Asia 2019 conference.

The interface is the strong point: even users who interact with this system for the first time can use it immediately. They make simple movements and complex tasks in a very wide range of possible applications. Here is a video showing some of them.

Co-Limbs robotic arms are placed on the user's back. On each of them there is a controller, at the wrist, to be able to guide the movements (both hands and fingers). The fingers can move separately, clench into a fist or open.

The device works with objects in two stages: first the arms 'capture' an object, then they start manipulating it with the user's help. The applications can be different, all useful:

Support for lifting heavy objects: is the 'classic' use of an exoskeleton. The arms can exert a force (equal to or greater than that of a user) halving or eliminating the fatigue of lifting or holding a raised object. In the demonstration, a researcher grabs a tray with robotic arms and then moves the contents with his hands.

Programming of actions: the arms can be programmed by “recording” a specific action and then repeating it at will. In the video, a researcher lets himself be "blown" with a fan after having properly recorded the movement on Co-Limbs. It's just an example, even rather frivolous, but it gives the idea.

A very interesting development, which will add agility and versatility (also helping to reduce costs and weight) exoskeletons of the next generation.

Here is the research in detail. 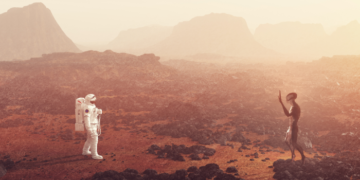 A multidisciplinary panel and a German scientific project question our ability to react as a society to the discovery of ...