Transcranial stimulation for depression has another portable device. British patients can buy it from today. 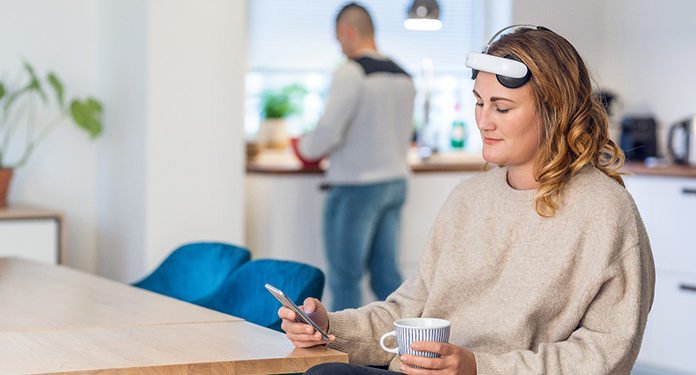 The first officially approved brain stimulation device for depression in Europe (at least until Brexit is complete) it is available for purchase and use, even at home.

The depression device, which uses small pulses of electricity to manipulate activity in the front of the brain, is used in conjunction with a therapy app on your smartphone.

With the transcranial stimulation Direct current (also known as tDCS) science has been shown to improve symptoms of depression in numerous studies.

Now a research team of the Flow Neuroscience has incorporated this non-invasive technology into an easy-to-wear headset, available for purchase at a price of 460 euros.

tDCS uses a weak current to change the electrical potential of neurons, making them more or less susceptible to activation.

The Flow earphone directs this stimulation to an area of ​​the brain that is just behind the forehead, the prefrontal cortex. An area involved in personality, decision making and emotion regulation.

The system uses the formula of the earphones precisely to rebalance this activity by distributing the impulses as needed.

Users wear the headset for 30 minutes 18 times over a span of six weeks.

A special app on their smartphone constitutes a sort of virtual assistance or therapy that guides them to eat better, sleep better, exercise more and meditate.

Based on feedback and usage patterns, this assistance can change and update very promptly up to twice a week if necessary.

The consecration of the tDCS

Previous research on tDCS and depression has had mixed results. However, two recent studies showed that tDCS had similar effects to antidepressants in reducing symptoms of depression, but with fewer side effects.

Side effects of antidepressants include anxiety, fatigue, weight gain, and nausea. The most common effects of tDCS are temporary redness under the electrodes and a mild headache.

Stephen Buckley, president of Mind, a non-profit organization that promotes mental health solutions, anything that contributes to effective treatments for mental well-being is welcome.

"What works varies from person to person and can include psychological therapies, medications, exercise, self-help and social support. "

Buckley adds that the ability to stay in touch with people using treatments is important.

The device is aimed at those who have a diagnosis of depression. In the recent past it has had use in several clinics across the UK and is now available for purchase online.

A new hydrogel developed in Japan solidifies when exposed to heat: it can become a formidable protection from traffic accidents ...