Want to eat the world and some basic gaps: NeuWai is practically China on two wheels. Here is his "ignorant" electric motorcycle at the debut.

For some years now there has been a flourishing of high-end electric motorcycles, mostly in the sports sector. Today NeuWai is about to debut an electric street bike, and with it a couple of very interesting scooters.

NeuWai is a spin-off brand of Chinese carmaker Sunguo Motors, and made its debut this year at the Seoul Motor Show.

NeuWai called the MT104 an electric touring bike with a range of 140km at a top speed of 150km per hour, which doesn't make it really suitable for crossings. This in spite of its equipment: a 19kWh battery, one of the most capacious of the whole electric vehicle industry.

However, there is no question of comfort: with its decidedly lowered set-up (only 69cm), the comfortable front pedals and the wide seat the MT104 has a decidedly “cruising” appearance.

The MF104 is built with the same chassis and uses the same 19 kWh battery. Unlike the "little sister", however, it has a little more spice, with an engine that delivers 25 kW continuous and 40 kW peak. This translates into a top speed of 200km per hour, which sets it pretty high for the speed factor.

Curiously, despite having the same battery and more power, MF104 also has a bit of more autonomy, 150km, I guess due to the different ergonomics of the seat and the more aerodynamic structure (suitable for speed on the highway).

NeuWai also has a pair of electric scooters with an “ignorant” and brash futuristic line, as per tradition. They are the CN104 and the CL104.

The smallest, the CN104, comes out with a 3.6 kW continuous engine and 6.6 kW peak, and a top speed of 90 km / h. Definitely faster than its European counterparts. The 45km range is however limiting, and at this point I would say an Achilles heel for the whole company. The seat for two people is "cosmetic": the scooter is approved for one person only.

Those who choose the CL104 benefit from a slightly higher maximum speed (100km per hour) and a much smoother range, 80km.

Still no details on the launch price, only on the dates: production and deliveries will start from the first quarter of 2020. For everything else there are specifications on the official website.

What do you think of this new wave of two Chinese electric wheels?

Are they competitive or will they slam their faces with the most expert European productions? There would also be the third way: departure (this one) with lights and shadows, and from the next lap they will be very strong. 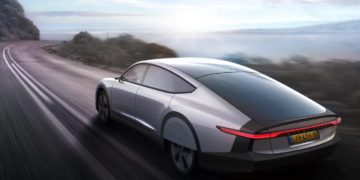 Solar panels on the roof and front hood for record autonomy: Lightyear One amazes for performance. But what prices!