Inspired by the small Chinese boats made of rushes that once crossed the Dongyang River, the Yiwu Grand Theater leaves you speechless. 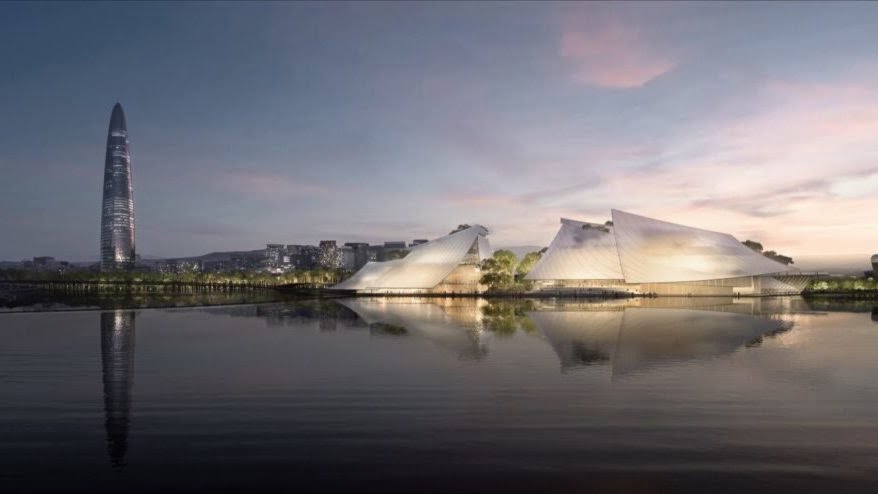 With a fantastic proposal, the MAD team of architects won the competition for the construction of the Yiwu Grand Theater in Zhejiang province.

Inspired by the small Chinese boats made of rushes that once traveled the Dongyang River, Yiwu Grand Theater is precisely shaped like a boat. A striking translucent glass boat that "floats" on the water with lines vaguely borrowed from the ancient architecture of the region.

Its semitransparent glass facades are designed to improve the management of light and temperature.

Yiwu, the county town of China's largest market, has built its reputation on trade, not culture. To grow also in this sense, it has launched a competition for the design of an artistic and cultural hub.

The building will include a 1600 seat large theater, a 1200 seat medium theater and a 2000 seat international conference center. The project will also count on a large public green space with squares and an amphitheater that will extend up to directly lap the waters of the Dongyang River.

"The Yiwu Grand Theater was conceived as a monument of the city that provides residents with a new perspective," explains MAD, the Beijing-based architecture team, winner of the tender. "In this interpretation it is thought of as a world-class place that will attract tourists from all over the planet, putting Yiwu on the map as a cultural destination as well."

The transparency and lightness of the glass recall silk, with a structural “rhythmic” that almost seems to move the building in the wind.

The structure collects heat well in winter and produces a comfortable environment, while in summer it can "open" to promote natural ventilation.

When it is completed (starting in 2020) the Yiwu Grand Theater will compete with the more famous Sydney Opera House, almost picking up its cultural baton to take it into the new millennium.

The Liyang Museum is an aluminum spaceship in the shape of a musical instrument. A beautiful building, destined to challenge time.