Two nacelles form wings, and inside there is everything: passengers, tank and hold. It consumes much less than current planes, and now someone has decided to make it seriously.

The development of the Flying-V, a triangular-shaped aircraft that adopts revolutionary measures, has had new impetus with the announcement of a loan from the Dutch national airline KLM.

Born to improve the sustainability of air travel, Flying-V was conceived by Justus Benad, at the time of the projects still a student at the Technical University of Berlin, and subsequently developed by researchers at the Delft University of Technology in the Netherlands.

Its futuristic design incorporates the passenger cabins, the tank and the holds directly into the wings: with this system the aircraft uses 20% less fuel than the Airbus A350-900 for the same number of passengers (and wingspan).

"In recent years KLM has been a pioneer in the sustainability of civil aviation," explains in a press release Pieter Elbers, CEO and president of KLM. "We are proud of the growing collaboration with TU Delft University."

The project leader at the Dutch university, Roelof Vos, echoes it, underlining the need for innovation to make civilian flights move forward in the direction of technology and efficiency, with the aim of eventually creating fully electric airplanes on a large scale.

The Flying-V's energy efficiency is the result of its frontier aerodynamics, which also contributes to the aircraft's low weight. The first small-scale model capable of flying will be completed in September, and the following month it will be the turn of the passenger cabin, this time full-size, which will be installed in Amsterdam's Schipol airport to be visited by the public.

If they seem close stages, however, I will have to extinguish the ardor: the entry into service of this aircraft that will completely subvert the rules of design will not happen before a very tight battery of safety tests, which can last up to 20 years.

“We are in the preliminary phase of testing, it will take months, perhaps years in the wind tunnel to optimize efficiency, stability and sustainability”.

Go on like this, on the… er, IN the wings of enthusiasm. 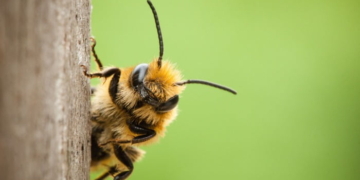 A special unit of the Carabinieri in Rome uses bees to carry out environmental biomonitoring. A very, very interesting project.