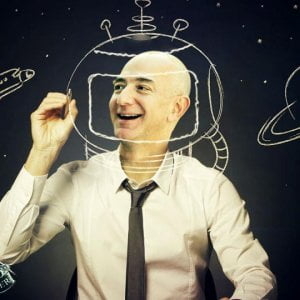 The Amazon is going to change our lives, and not just when it comes to buying products online. No, Jeff Bezos really wants to take us into space, as tourists, and he promises to do so within two years only. Science fiction or very close reality?

In fact, it seems that Bezos will start testing space flights with people on board from next year and, hopefully, tourists in groups of six will be able to experience a short space flight as early as 2018. Bezos himself said, opening to journalists the doors of his space company headquarters Blue Origin around Seattle.

Blue Origin isn't the only company of its kind in the US - there's also Elon Musk's SpaceX and Richard Branson's Virgin Galactic. Bezos wants to be the first ad offer tourist space travel to ordinary citizens, up to 100 suborbital flights per year. Obviously, passenger safety will be put first.

Amazon's New Shepard reusable space rocket, with the capsule that houses the crew, carries six passengers, in zero gravity for a ten di minutes before having to return to Earth. Many people would be interested in an experience of this type, obviously at quite high costs. Blue Origin, founded in 2000, has so far made two successful launches. Will we really be able to see the Earth from afar?

The app that lets you see is coming