Days ago, in the long wave of farewell to Steve Jobs and waiting for his biography, many experts discussed Apple's strategies in the communications sector, indicating how from Cupertino they were ready (or almost) to revolutionize, after music and telephony, even the television market.

Jobs' death has not slowed down the plans of an Apple TV ready to provide content and services by exploiting its distribution channels (itunes) and simple and successful interfaces (aiming to eliminate the remote control means Siri, by eye and cross): however, as often happens, when Sparta makes war trials it is easy to find an army in Athens that is marching towards the same destination.

The Mountain View house is planning tests for its cable television service in Kansas today. Content on demand and high speed internet: Google TV is a project in a more than advanced stage. It is a very interesting prospect, which would put Google on a completely new track, as a television and connectivity provider: a game change similar to the one that iPhone has brought to Apple, so to speak.

We will soon notice important developments: since 2007 (on the old Futuroprossimo) I pointed out to you how Google was acquiring various licenses in the communication sector, and buying large lots of transmission cables, which I thought were intended for fixed telephony (here is the original article): it seems the time has come to use them, and they won't just be for talking :) 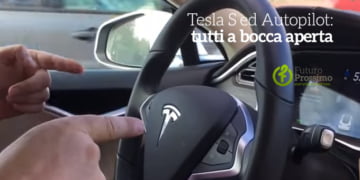 Tesla S and Autopilot: the world with an open mouth

The lucky owners of a Tesla Model S car are finding themselves in recent weeks with a new function on the car: the Autopilot ....