The Twitter dress shows the messages in real time

Wearable technology has already made its appearance in the sports field (now bracelets and chest bands for monitoring data and performance are countless) and is now preparing to land in the world of high fashion: the model and pop singer Nicole Scherzinger wore a dress connected to twitter a few days ago and able to show her stream of messages in real time. A crazy boor according to myself: yet in its own way noteworthy and capable of capturing attention.

The creators of the dress (the group Cute Circuit) incorporated thin LEDs capable of forming a 'fabric-display' that showed messages from fans around the world on the artist's body during his performance: the test, fully successful, took place during a presentation of EE in London, a telephone company that has just launched its 4G network.

What do you think? I immediately got the feeling I was tweeting “this dress really looks like shit on me” to show on her back.

It is only the beginning of a fashion based on the interaction between the wearer and the observers, perhaps capturing attention not only with aesthetic factors but with elements of information: it could happen that we read the results of the last American elections directly from the back. of our table neighbor at the restaurant. 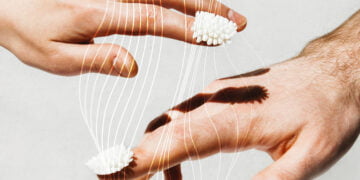