Death is the end of everything. Our brain, although it has worked well for many decades, at the time of our departure from the world, in just about twenty minutes undergoes anoxia and neurons and synapses fall apart. No machine, after such damage, will be able to revive us; it will be able to reactivate heart functions and circulation but our brain will be gone forever. And to say that the brain is "gone" for the rationalist and transhumanist philosophy means that "we" are gone as we are our brain. In it there are our studies, our professionalism acquired at work and the memories of the emotions of our life, in other words our "I" which will never again be able to return to consciousness.

“And all those moments will be lost in time… Like tears… in the rain. »

So said Rutger Hauer impressing the android who was about to die in the majestic film Blade Runner by Ridley Scott. Each year, 57.000.000 humans leave this world forever and will never be able to return, yet there are ways to avoid this, or at least try to avoid it. One of them is cryonics, that is, the conservation of the body (or just the brain), just after death, in liquid nitrogen. The damage caused by freezing may become reversible with a technology of the future that could emerge at the end of this century or in the early 2100s. This involves taking an "ambulance to the future" with which to arrive in a state of suspension from which you can be revived. A full Ralph Merckle popular article on cryonics is available on the site Futurology.it. We also remember that in Italy there is the initiative LifeXt by Bruno Lenzi promoting crionics and that much more documentation is available on www.estropico.org.

However, there is also another system, proposed very recently, to achieve the same result without the use of the expensive machinery necessary for permanent brain freezing: chemical preservation.

In practice it is not a question of freezing but of preserving the brain through chemical preservatives, preventing it from being destroyed by the attack of oxygen or bacteria, if you like, this is a new and modern form of mummification. To propose this economic system (cost between $ 3.000 and $ 10.000 when it will be fully operational) is the Brain Preservation Foundation whose technicians state that neuroscientists already today can store small volumes (about 1 cubic mm) of animal brain tissue immediately after death with incredible precision since the characteristics and structure of each synapse within these volumes are well preserved until at the nanometer scale, using an inexpensive method of chemical fixation, operating at room temperature, called “plastination”. The image in the photo is an example of plastination of a local brain circuit, already implemented in the main neuroscience laboratories. Starting from this a part of neuroscientists today would agree that our memories are written in the brain at the level of synaptic connections, a synaptic preservation of an entire brain after clinical death would probably have the capacity to preserve an individual's memory and identity. that he undergoes this process, which is, however, as already mentioned, particularly economical.

Problem: How could an individual whose brain has undergone cryonics or plastination return to consciousness?

The only way it could do this is to wait for the evolution of connectome techniques, that is to say those software that try to emulate the internal connections of a human brain by computer and then reproduce its functions. So, by properly storing the same, we may in the future (the conditional is a must) born again (in self-awareness and memories of a whole life) inside a new generation electronic computer. From here then the step of reconstructing an android body with which we can move and interact with the outside world would not be of extreme difficulty even considering that at that point, no longer having to live in a perishable organic body, we would in fact have achieved a semi-immortality.

Finally, we should remember the great Arthur C. Clarke, author of 2001 A Space Odyssey, who before leaving us predicted, in an interview with Newton magazine, that in the future “we will reach electronic immortality”. 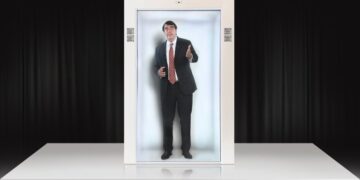 PORTL Hologram grows with other funding and aims to create a system: holographic phone and entertainment hub. Towards the era ...